The Truth About Gretchen by Alretha Thomas 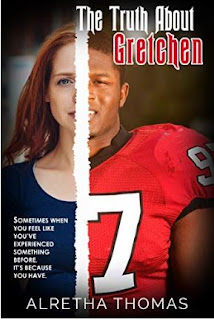 The Truth About Gretchen (Dancing Hills Series Book 2) by Alretha Thomas
Synopsis:
Gretchen Holloway, in her final year of graduate school, is in the throes of auditioning actors for her thesis film, inspired by a murdered young football star who has haunted her dreams for two years. Gretchen believes making the movie will be cathartic. But instead of freeing her, embarking upon the film production unleashes a sequence of events that lead Gretchen to conclude that she’s the reincarnation of the young man.


Regina Wilson has always wanted to be an actress. When her agent gets her an audition for a role in Gretchen’s film, which eerily mirrors one of the worst events of her life—the unsolved murder of her older brother, Robert—she’s hard-pressed to go through with it. Upon fleeing, she leaves behind a keepsake that features Robert’s photo. Gretchen sees the picture and recognizes Robert from her dreams. She tracks down Regina, and after being rebuffed and called crazy, Gretchen’s unexplainable knowledge of events in Robert’s life eventually convinces Regina that Gretchen is Robert reincarnated.
The two decide to have his case reopened, but their significant others are dead set against it, and the police, who believe that Robert’s death was gang-related, are less than cooperative. However, Gretchen is desperate to get justice for her former self, and Regina wants justice for her brother. The women piece together the final week of Robert’s life. And the deeper they delve into his past; one shocking revelation follows another, leaving them wondering who they can trust and if they’ll live long enough to find Robert’s killer and bring him to justice.
Chick Lit Cafe’s Review:
The Truth About Gretchen by award winning author, Alretha Thomas is an intriguing, captivating mystery unlike anything I have ever read. This is one of those rare books that must be made into a movie. Readers are in for a surprise with this suspense filled, mysterious and emotional book.
Gretchen Holloway has been cursed with recurring nightmares about a young man who has been murdered. She is a graduate film student, and feels a strong need to make a movie about her dreams and what she sees.  Regina Wilson’s brother, Robert, was murdered twenty-six years ago, and it has since gone unsolved. She is an actress about to audition for the leading role in Gretchen’s film, but she backs out at the last minute with the chilling feeling that the film strangely resembles her own brother’s murder. However, she mistakenly leaves something behind which Gretchen finds. This seemingly insignificant item bonds Gretchen and Regina together in an intriguing, momentous and spiritual way.
Alretha Thomas’ expressive writing style captivated me from the very first chapter. I quickly connected with Gretchen and Regina, as I felt their emotions, heard their thoughts and could picture the entire scene as they were driven to find Robert’s killer. With a powerful original premise and compelling storyline woven together beautifully, The Truth About Gretchen is the best book I have read in years. It is magnificently written in the first person of the two main characters. This story is a rollercoaster ride with many dirty players involved. With a depth rarely seen in mystery and suspense books, the author has created a one-of-a-kind story with remarkable, relatable and likable characters and compelling clues that all come to shape magnificently, drawing the reader further and further in at every turn of the page. The conclusion is astounding.
The Truth About Gretchen by Alretha Thomas is a welcome gift to all readers who love mysteries that go beyond the ordinary. But, instead delves into extraordinary unique elements that will keep them coming back for more from this noteworthy author. This is a 5 star must read book!
Purchase The Truth About Gretchen by Alretha Thomas

Feast of Men by Ayn Dillard 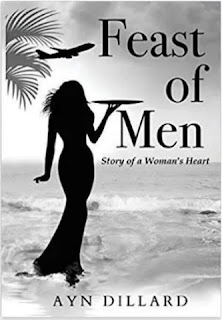 Feast of Men: Story of a Woman’s Heart by Ayn Dillard
Synopsis:
A woman’s magical mysterious, nightmarish, adventurous journey through men on her quest to have a better understanding of the male energy on her search to find genuine and everlasting love. Just as life brings her the masculine offering of a chance for love, along with experiencing another aspect of herself in reflection – her heart is disappointed even broken. She then is given the opportunity to heal, as she becomes even more aware of the masculine energy and her relation to it, along with a deeper awareness of her imprints and beliefs. As she travels forward on her journey, the pieces come together, break and then come together again offering her the ability to become more aware and whole. What if Eve was leading Adam to the opportunity to experience all and every dimension of life? The feminine as it relates to masculine and masculine as it relates to feminine. Male and female rubbing souls against one another for the possibility and benefit of what love creates and heals. And this is exactly what God intended – in the full power of ‘his knowing’ – that only a woman would be able to entice a man to do so. God, after all created the serpent along with the opportunity for choice without which there would be no dark defining light challenges on earth.
Review:
The author, Ayn Dillard, has skillfully written a novel that bares the soul, incites the reader with the injustice and cruelty of a narcissistic father, as they join Natalie Duncan on her journey to release her past and find true love.
Natalie’s relationships have a tendency to build up her hopes, only to fall apart as the men who initially pursue her have not dealt with their individual struggles and issues. After three painful divorces, Natalie is ready to find genuine and lasting love. On her way home from visiting a wealthy playboy architect, she is swept off her feet by a handsome airline Captain. The events of the day magically draw them together with the promise of everything she has ever dreamed of. However her moral determination will not allow the relationship to progress until after he has legally left his unhappy marriage. Making this decision, leaves her feeling abandoned. While waiting for the outcome, on a whim she answers an ad and meets another man who appears to be a possible partner, until his personality unfolds and she finds herself questioning. Woven into her heart-felt psychological journey, she endures the cruel jibes of her father. Desiring his approval and affection, she is met with his disappointment and hostility. Added to this, is the betrayal by a prominent local businessman who employs her to write a book with him that turns into his unwanted sexual advances. Natalie proves to be an exceptional woman of strength and character who is dealt repeated cruel blows in her search to discover herself, heal from her family dynamics and achieve her dreams. The book culminates into a cliffhanger making the reader wonder how Natalie will be able to deal with all she has been dealt and which man will win her heart.
The author, Ayn Dillard, has written a moving and emotive novel that examines the human psyche. She described her own inner turmoil in such an intricate and personal way that it draws the reader into her journey to feel he depth of her emotions. The complex relationships are related in intimate detail which helps the reader to understand her need and search. This is a stunning piece of writing that really examines the soul and opens the heart and will leave every reader wondering about their own loves, dreams and desires. It’s not just about love and companionship, but about truth. It’s about the need to be desired and ultimately about understanding who you are and feeling comfortable with what you discover as energy frequencies try to align. The depth of this author’s affection, tenderness and sentiment are reflected perfectly in Natalie. Throughout this story the reader is led to empathize with her and to have the desire that she finds fulfillment and happiness though love.
FEAST OF MEN examines the intricacies of the female heart and mind juxtaposed against that of the male and emphasizes every human’s need for genuine love and understanding. You will not easily forget this novel or this author. This is a novel that truly has the heart and soul of the writer on every page.
Purchase Feast of Men: Story of a Woman’s Heart by Ayn Dillard today!