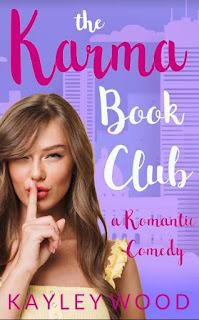 Synopsis:
Mia never felt the need to speak up for herself… not with three protective sisters (who always know what is best for her), an assertive boyfriend (Doug never minds speaking for her), and then there is her bestie, Kat, who has no problem stealing the attention for herself.
With a nervous bladder (which strikes at the worst possible times) and a fear of public speaking, Mia is comfortable with the way things are.
That is, until Mia comes home to find her things packed by the door and is told the news that her boyfriend and best friend fell in love.
Now homeless and anything but comfortable, Mia’s three sisters come to the rescue (as usual) by helping her land the perfect apartment, but a colossal mishap lands gorgeous, bad boy Logan on her doorstep with a key and a lease of his own.
In exchange for a free month’s stay, Logan agrees to help Mia find the voice and confidence she now desperately craves.
The plan? Mia will finally stand up for herself and give her exes what they deserve.
It’s not revenge. It’s Karma.
Mia’s one rule: No matter how charming, funny and sexy Logan Miller is, she cannot fall in love with him.
Logan’s one rule: No matter how adorable, sweet and sexy she is, Mia is off limits.
Are some rules made to be broken, or will Logan turn out to be what everyone warned her he was: someone who would only break her heart in the end?
An updated, professionally edited version. Although all books in the Club Series can be read as a standalone, it’s way more fun to read in order.

The Karma Book Club: A Romantic Comedy (Club Series 2) by Kayley Wood
Book review:
The Karma Book Club: A Romantic Comedy (Club Series 2) by Kayley Wood is a must read, 5 star romantic comedy with delightful characters, an exciting, funny and heartfelt narrative and convincing, addicting plot.
Mia watches her entire life crumble before her very eyes as her so-called “best friend” and her supposed trustworthy “boyfriend” sit her down on her favorite red couch (that she purchased) to break the heartbreaking (for her) news that they were in love and kicking her out of her own apartment. Shocked and numb to this appalling and shameful act of betrayal, Mia has nothing to say but her mind races with a million thoughts. One being how she had paid for the majority of everything in her apartment and now she is getting nothing, but practically kicked out onto the street. What wonderful friends she has. Good thing Mia also has her sisters who come to her rescue like she knew they would, in their own ways of course but each very resourceful.  They even found the perfect new apartment for her that would set her on a good start to a new life on her own minus the toxic people she was leaving behind and to keep in her past.
Logan has been couch surfing for the past few months after having a fall out with a rich and popular power couple that had already made sure his good name was tarnished. This seemed to be preventing Logan from obtaining a new job which led to his stay at his best buds pad that he shared with his very reluctant girlfriend. He needed a place of his own and a perfect apartment happened to be opening up as soon as the old tenant died, which was at any moment now, Logan was told by his friend. Leases are signed and moves are made. Mia finds Logan at her door with a pleasant misunderstanding. With an agreement of exchanging confidence boosting coaching sessions for free rent, Mia decides to keep things platonic between her and Logan, despite his gorgeous looks and dashing personality. But that doesn’t quite work out for Mia when sparks fly with Logan!
The Karma Book Club by Kayley Wood is hilariously funny and unique! A fun plot that keeps you guessing at every turn of the page! This book had me laughing out loud, along with experiencing many heartfelt emotions throughout this grand slam of a story! Kayley Wood has really delivered a fun-loving novel with charming characters and a delightful plotline to boot! She has a creative expressive voice and delightful writing style, drawing the reader in, engaging them with her outstanding narrative and plot. The Karma Book Club is a story which shows that even when life seems impossible and hopeless there is still a light at the end of the tunnel. Life has a funny way of working itself out and this is a perfect portrayal of such. What a great read! Chick Lit Cafédefinitely recommends The Karma Book Club: A Romantic Comedy (Club Series 2) by Kayley Wood to all readers who enjoy original romantic comedies filled with down-to-earth emotion, relatable characters and packed with clever “LOL” humor.
~Reviewed by Beatrix Bloom for Chick Lit Café~

What readers are saying about The Karma Book Club

“I must say I am totally wowed by this author. I spent as much time laughing as I did crying at parts of this story.” – Amazon review
“Phenomenal. I laughed a lot with this one. Well done Kayley.” – Amazon review
“I don’t believe in Karma so I wasn’t sure I’d enjoy this book, but I did! So funny!” – Amazon review
“Logan stole my heart. Mia needed Logan for her to be the person she should be.” – Goodreads review
“I knew I liked Logan Miller! I was excited to read this one after The Virgin Club and I wasn’t disappointed. It was the right balance between fun and emotion and romance. – Goodreads review
Really love this series. Can’t wait until the next book is out. – Goodreads review
Check Out The Entire LOL Romantic Comedy “The Club Series” by Kayley Wood