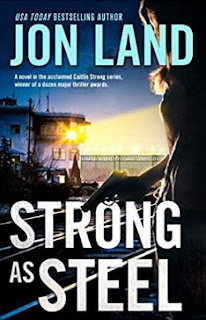 Strong As Steel (Caitlin Strong Novels) by Jon Land
Synopsis:
Tough-as-nails Texas Ranger Caitlin Strong returns in this electrifying tenth installment of the series, by USA Today bestselling author Jon Land
1994: Texas Ranger Jim Strong investigates a mass murder on a dusty freight train linked to a mysterious, missing cargo for which no record exists.
The Present: His daughter, fifth generation Texas Ranger Caitlin Strong, finds herself on the trail of that same cargo when skeletal remains are found near an excavation site in the Texas desert. She’s also dealing with the aftermath of a massacre that claimed the lives of all the workers at a private intelligence company on her watch.
These two cases are connected by a long buried secret, one that men have killed and died to protect. Caitlin and her outlaw lover Cort Wesley Masters must prove themselves to be as strong as steel to overcome a bloody tide that has been rising for centuries.
Review:
Strong As Steel (Caitlin Strong Novels) by Jon Land tells a story that begins with Texas Ranger Jim Strong, who is consumed by a mystery that has dumbfounded the elite lawmakers from the start. In 1994 a freight train is found abandoned, with dead bodies in abundance and no cargo. The mystery begins as there appears to be no logical explanation for the deaths, there being no outward signs of injury and no evidence to point to the cause of death. Add to that the strange disappearance of a cargo that has no record of its existence, and Jim Strong begins his quest to find the answers.
Twenty-five years later, and Jim Strong’s daughter, Caitlin, finds herself asking the same questions as her father when more mysterious deaths occur that are suspiciously similar. Caitlin has followed in her father’s footsteps and is a Texas Ranger, and she has inherited her father’s determination and dedication to the job. She sets out to unravel the mystery of the elusive containers and to discover their curious contents, whatever they may be. But there are others at work with a similar goal but a different purpose. Enter Molinari, a religious zealot determined to protect the secret of the past using whatever means necessary to accomplish his task.
Then we have a little girl as the ring-bearer at her father’s wedding who witnesses a massacre that molds her life’s journey as she becomes the deadly yet revered Luna Diaz Delgado, determined to rule by fear. Such is the roller coaster of this novel, a reader’s journey of mystery, hatred, deceit and murder, yet interspersed with family loyalty, an enigma from the past, hints of the supernatural, and a man who talks to ghosts.
There is so much in Strong As Steel, the tenth book (no less) in the Caitlin Strong series that it leaves the reader breathless in anticipation and turning the pages with expectation that all will be revealed and then being thwarted as the mystery deepens. Caitlin is all that her name suggests; strong in character and mind, unafraid of the consequences of her actions, still desirous of making her father proud, and yet at times there are glimpses of someone compassionate and controlled.
If the synopsis for Strong As Steel does not capture your imagination, then just open the book and you will be drawn in from the first page. The fact that this is the tenth book in the series is testament to the standard and quality of the writing, the vivid mind of the writer, the strong and well-developed characters, the Individuality of the protagonists, and that’s before even starting on the suspense that is created within the pages, culminating in a satisfying yet surprising ending. This is one of those books that the reader becomes so engrossed in, the end comes reluctantly. Author Jon Land, writes with confidence and credibility and brings these incredible characters to life with ease. Chick Lit Café is proud to recommend Strong As Steel by USA Today best selling author Jon Land, an excellent 5 star read for lovers of mystery, action, suspense and adventure.
Purchase Strong As Steel by Jon Land @Amazon today!