Diary of a Divine Relationship: Jack & Kelly by Theresa A. Laws 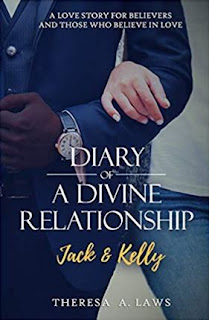 Diary of a Divine Relationship: Jack & Kelly by Theresa A. Laws
Synopsis:
Jack wasn’t perfect but he could admit it. Kelly wasn’t perfect nor could she hide it. A beautiful love story of a confident Christian politician and his love for a reluctant beautiful woman with special needs. Jack Riley, is an up and coming politician embarking on a new campaign to win a congressional seat in the state of Mississippi. Full of compassion for people, he’s fulfilling his ailing father’s wishes to take up the cause of social injustice. He’s also waiting on something or rather someone else he didn’t know he needed to fulfill his journey. Pressure from his mother and her tactics in matchmaking cause him to stop seeking all together and give the matter over to God. Kelly Sanders has had many obstacles to overcome due to special needs, but she and her family never give up. Seeking to overcome rejection through prayer and an ever determined spirit she reaches many of her life goals. But, something she never expects proves that God does indeed have a sense of humor as these two lives intersect. Jack and Kelly are both seeking to love and to be loved. Is she the one for whom he waits? Can their different paths merge into one? What do they learn about God and each other? Can family and friends derail heart decisions? What lessons are we taught as we journey through life with them? Be prepared. Be very prepared.
Review:
Despite her youth, Kelly was a brilliant and scholarly intellectual, being the only one in her family to earn her BA degree. Her mama, Emma, always knew her youngest daughter was smart and had a uniqueness apart from her older two girls, but she was also very protective over Kelly. And this was because even though Kelly was so intelligent, there was something else that made her “special”, due to complications at birth. Her condition caused bouts of social awkwardness fueled by severe anxiety, memory loss and unpredictable behavior, which trying to control with meds always just put her in a lethargic and sedated state. Emma figured she would always be the one to care for her youngest daughter, even after her older two were married off. Kelly would be the one to remain single because of her mental health and its circumstances.  That was up until her graduation, when to her mother and older sister’s surprise, a charming and charismatic man: Jack Riley, shows interest in young Kelly. But what are his intentions? What would a popular, almost celebrity-like, aspiring politician want to do with naive and inexperienced Kelly? Emma and her other daughters were unsure, but they did know one thing, they were not going to allow her to be taken advantage of. But maybe, just maybe, Jack was different as well, with a calling even unbeknownst to himself.
A completely enthralling and heartfelt story of how true, unconditional love still exists when we least expect it, and can come from the most unlikely of sources. Theresa A. Laws paints a lovely picture of a cute and quirky romance that will keep you guessing at every turn of the page. Funny and lighthearted, Diary of a Divine Relationship: Jack and Kelly had me smiling till the very end. It was refreshing to see such a strong, and vigorous, steadfast faith in God within Laws’ progressive characters. Her descriptive and colorful narrative really makes the reader feel connected and engaged with each personality they encounter, along with very relatable issues and storyline.
If you’re looking for an outstanding illustration of the power of prayer and how God works in mysterious ways, Diary of a Divine Relationship: Jack and Kelly by Theresa A. Laws is a perfect portrayal of such beautiful wonder. I thoroughly enjoyed this fun and delightful book and also was able to really appreciate the lessons to be learned from it. All very important things to be packed into one story, and Laws nails it. It is a definite recommend to anyone that desires to read something so expressive and lively.
Diary of a Divine Relationship: Jack and Kelly by Theresa A. Laws is a must read, and should certainly be added to your to-be-read book list!
Book reviewed by Beatrix Bloom for Chick Lit Café
Purchase Diary of a Divine Relationship: Jack and Kelly by Theresa A. Laws today