Into the Lyons Den by Donni De-Ville 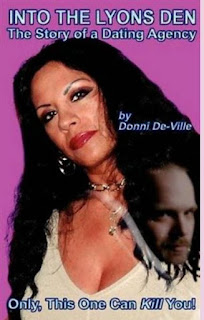 Into the Lyons Den by Donni De-Ville
Synopsis:
Story set in England, based on some exaggerated true life events and emotional experiences of the author.~ ~ ~ ~ ~ ~ ~ ~ ~ ~ ~ ~ ~Instead of a flowery romance, Viv, the main character, encounters far more than she could ever have bargained for, or deserved. The reader will go through all the gamut of emotions with the 3D characters, and enjoy the strong story-line all the way through the book. The ending is un-anticipated and you would have to be made of stone not to be deeply moved.
Viv, still heartbroken about Lawrence, a man whom she fell deeply for previously, is still getting over a nasty divorce from the man she married to get over the memory. She becomes a member of a dating agency, when her pent up emotions rise, as she becomes attracted to the owner of the agency. Viv then falls for two very different men. One who fills a woman’s every desire, but in choosing him, life would become as dangerous as walking a tightrope. The other man depicts total stability and a wholesome ruggedness, but without the erotic excitement. Vic’s separate world’s eventually square up with shocking consequences.
With a sinister thread causing havoc in the lives of most of the characters, crime, murder and mystery runs throughout the action-filled story.  Clues are given and each chapter’s ending has a cliff hanger, making it difficult to stop reading.
Men can also relate to this sensual, sexual romance in ways which can help them learn more about the intricacies of the female mind.  The characters individually take the reader on an emotional journey, which probably the reader has never experienced before, invoking feelings and thoughts they will think deeply about.
Should some of these scenarios play-out into the real world, (as have occurred with the author) the climatic twist would be similar to the ending of this story.
An unusual and unique, exciting story the reader who loves thrillers will want to share with others and a story never to be forgotten.
by Donni De-Ville @Amazon  https://donnideville.com
Review:
Into the Lyons Den by Donni De-Ville is an exciting, racy novel filled with raw emotion and a thrilling, unexpected storyline. The story is about Viv, a beautiful woman who is remembering her first love and the intense passion she felt with him. She had made the decision to part with Lawrence due to her own fears and inability to trust. Unable to shake him from her thoughts and mind, she decides to take action and look for a new man that she can love and spend her life with. She stumbles across a dating agency entitled “The Dandy Lyons Marriage Agency.” She reluctantly makes the decision to visit the agency and sign up. What Viv doesn’t know is that her life is about to be turned into a rollercoaster of turmoil and upheaval.
This is a story based on the true life events of author, Donni De-Ville. It is compelling, thrilling and engaging. There is a lot going on in this story including, kidnapping, murder and many crazy scenarios. I couldn’t put this book down. From the very first chapter I was completely drawn into the life of Viv and all the things that she goes through. She encounters many different types of men and interesting people along the way. First, we meet the Lyons, the owners of the upper-class dating agency. While at a party with them, a murder occurs. Viv and her new friend begin to help clear the main suspect and she ends up getting more than she ever bargained for.
Throughout her journey, Viv, meets many unlikely characters including a transgender, an exuberant detective, a baron and many other, seemingly, questionable people. All the while a serial killer is lurking in the shadows. This is all a big change for Viv who works in an ordinary office in London. Her life has been turned upside down and she is on a thrilling, dangerous adventure.
This book is about crime, sex, lust, murder, romance and mystery. It is filled with twists and turns and at the end of each chapter readers are left hanging and hungering for more. It is the story of one woman’s desire to find a lasting true love and all the crazy things she goes through with the people she meets along the way.
Into the Lyons Den is fast-paced and action filled. Readers will be taken on an unbelievable ride of murder, madness and crime. There are tender emotional moments and some laughs along the way.
The characters and settings are beautifully described causing this reader to feel like I was right there watching on. It is written intelligently and extremely well. The author, Donni De-Ville, has a unique, crisp voice with a writing style that is very professional and appealing.
She has brilliantly woven a one-of-a-kind story with a solid plot and a conclusion that, I didn’t see coming, but is completely satisfying and exciting.
This book is a definite must read. Not only because it is based on a true life story, but because it is completely different from anything I have ever read. It is filled with intrigue and has the most interesting storyline, plot, characters and conclusion. It really touched me to my core, bringing up feelings and thoughts that are new to me. Chick Lit Cafe highly recommends Into the Lyons Den to all readers that are looking for a story to escape into that is realistic, engaging and shocking at the same time. Expect the unexpected. Unforgettable!
Purchase Into The Lyons Den by Donni De-Ville @Amazon 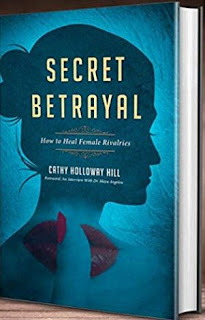 What motivates females of multiple ethnicities to bully, trash talk, sabotage, and humiliate one another? How can so many women form close relationships while at the same time secretly gossiping, competing, betraying, backstabbing, and envying?
This book will show women how to have closer, healthier, and more authentic relationships with each other.
Cathy Holloway Hill, Life Strategist and Psychologist, breaks it down with her own experiences, tools, research, and new behaviors proven to stop this epidemic head on.
Foreword is an interview with the late Dr. Maya Angelou. Also female celebrities (Barbara Corcoran, Shark Tank; Dr. Iyanla Vanzant; Dr. Wendy Walsh, and others), weigh in.
Readers will discover:
1- Why it happens;
2- How society reinforces hostile behavior among women;
3- Ages & stages of aggression;
4- What men think about it;
5- How the female brain is wired;
6- Critical steps for healing;
7- Advice from female celebrities;
And much more!

I wasn’t sure what to really expect in reading this (other than what the title implies), but right off the bat I liked the author Cathy Holloway’s writing style and her passionate and energetic narrative ‘voice’. It’s hard not to feel her warmth and enthusiasm as you read through these pages, and she really makes it a fun experience!

Unlike many ‘self-help’ or self-improvement books out there, she really hones in on a specific problem- the way that women can be each other’s worst enemies (or ‘frenemies”) and some ideas on what to do about it – mainly starting with building your own self-esteem and learning self-love, not self-hate.

She breaks this concept down even more into many different areas and gives specific examples (from handling bullying, toxic people, controlling and manipulative behavior, backstabbers, etc...), deeper explanations, and useful suggestions that you can use in your life right this minute.

I loved reading this and thought it was very insightful and constructed in a way that flows well from one topic to another, all while staying focused on the main theme of creating a stronger, more positive relationship with ourselves and therefore with others.

Ms. Hill has a talent for explaining her ideas so that anyone can easily understand her, and the writing was very good! I think anyone who wants to learn more about overcoming these negative experiences and learn tips to bolster self-esteem and confidence would appreciate Secret Betrayal: How to Heal Female Rivalries. Recommend. (5 stars)
Reviewed by Cherri Waerer