She Laughs in Pink by Jessica Calla 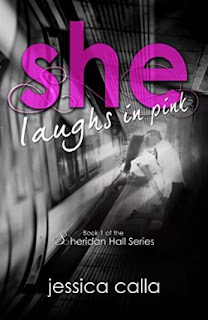 She Laughs in Pink: Book One of the Sheridan Hall Series by Jessica Calla
Four years after her twin is murdered, Juliet Anderson still struggles to overcome her grief. Two things keep her from falling into a deep, dark place—ballet, and her best friend-slash-super crush, Ben. When Ben decides to play football for New Jersey University, Juliet follows without hesitation. Finally away from the reminders of her past, she’s on her own for the first time, and focused on winning Ben’s heart.
Then she meets Ben’s tall, dark, purple-eyed roommate.
On probation and hell-bent on adhering to a “new life plan,” aspiring artist, Chase Cooper, has no time for womanly distractions. Unfortunately, the universe has other ideas. When he meets Juliet, their attraction is instant–the gorgeous ballerina makes his head spin and he’s never been so inspired to succeed. Only problem is, Juliet’s completely focused on his seemingly perfect, good guy roommate.
Freshman year in Sheridan Hall becomes a whirlwind of new friends, challenges, and heartbreak. Through it all, Juliet and Chase lean on each other, and their friendship changes into something more. Something neither of them is sure they’re ready for. For a chance at true love, they’ll have to risk their well-laid plans and learn to open their hearts to new beginnings.
Review:
Juliet Anderson is a ballet dancer and is headed to college at New Jersey University. She is in pursuit of, who she thinks is the love of her life, Ben. He has supported her and been a good friend to her since the death of her sister four years prior. Juliet’s sister, Justine, was murdered and Juliet blames herself. She is still struggling with major grief and receives no support from her parents.
While at the train station, Juliet meets Chase, a good looking artist who is passionate and the exact opposite from Ben. Chase is smitten with Juliet and Juliet is attracted to Chase.
It turns out that Chase is going to NJU also. He actually becomes roommates with Ben and is in the same dorm as Juliet. Chase and Juliet’s relationship and friendship grows and Juliet must rethink her plans and be open to a new life she unexpected.
She Laughs in Pink is a fabulous love story that I couldn’t put down. It captured me from the very first chapter and held me captive throughout the entire book. It is filled with raw emotion, drama and amusement. It is about college life, friendships, overcoming the past and dealing with life’s difficulties. Then there is the sizzling hot romance.
The setting is a college campus and the actual dormitory that our characters live in. They are a group of various personalities that each give the story rich and quirky enjoyment. The characters are diverse in their personas and each one adds to the flavor of the storyline. They are well developed and fleshed out causing the reader to fall in love with them.
This is a highly emotional novel with feelings running the gamut. I was fully engaged with the characters problems and them trying to overcome them. I felt torn apart and then delightfully put back together again. She Laughs in Pink has an artsy theme to it that is charming and appealing to the imaginary senses, as Jessica Calla describes her characters and the things they do. Readers will find themselves wanting to live at the Sheridan Hall dormitory, I know I did. The way Jessica Calla portrays college life is exciting, alluring and just phenomenal, even with its ups and downs.
She Laughs in Pink is an incredible love triangle story. The Main characters, Juliet and Chase both come from back grounds of hardship. With Chase being a bad boy type due to some bad choices in his past, it makes for a rich, satisfying and realistic read. The secondary characters are really exceptional. Jessica Calla has managed to write various different personality types and she writes them well. Readers will love these characters and they will hold their interest immensely.
The plot and storyline flows and the writing is phenomenal. Jessica Callahas a unique voice that I found refreshing and creative. This is a must read novel that readers will relate to and be completely entertained by. She Laughs in Pink is the first book in Jessica Calla’s “Sheridan Hall” series.
Chick Lit Cafe highly recommends She Laughs in Pink to all avid readers.


Purchase She Laughs in Pink by Jessica Calla @Amazon now