The Treasure of Gwenlais by M.T. Magee 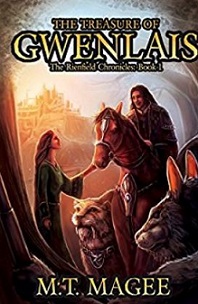 From the International, bestselling series, The Rinefield Chronicles by M.T. Magee, comes book #1, entitled The Treasure of Gwenlais. Book #2 is called “Child of the Kindred.” Whilst book #3 is now in production and highly anticipated by the fans of M.T. Magee’sexciting “Rinefield Chronicles” series.
The Treasure of Gwenlais
Synopsis:
COME AWAY ON AN EPIC JOURNEY OF ROMANCE AND ADVENTURE!Escape to the award winning mystical realm of Rinefield! Can a young reluctant Princess fulfill her destiny to heal the torn Kingdoms and the heart of a battle hardened warrior Prince?
Join Laurel on an extraordinary journey, filled with excitement, treachery, danger and finding a love you only dared dream of! A love story that will leave you breathless, and a world like none imagined! An unforgettable fantasy saga with characters you will fall in love with!
Review:Treasure of Gwenlais is a breathtaking novel set in the magical and wondrous realm of the Gaelic kingdoms in the Medieval Middle Ages. It’s an epic fantasy romance, influenced by the Scottish Gaelics of yesteryear along with their legends and folklore.
The description and the synopsis of the storyline about the “mystical realm of Rinefield” drew me in right away and intrigued me, so I was very excited to read this novel.
Beautiful Princess of Gwenlais, Laurel, is about to be murdered and is looking at imminent demise. Just minutes away from death, in comes Prince Caleb of the kingdom of Heathwin and saves her life.
Extremely fierce Rabkins murdered Laurel’s beloved mother whom was the Queen of Gwenlais. Now the Rabkin clan is pursuing Laurel and want her dead, as well.The Rabkin are a terrifying sort and breed, the humans dread them. They are thought of to be notable, cutthroat slayers, and a lethal power to deal with.
What ensues is a memorable tale of an adventurous journey, full of betrayal, peril, anticipation, romance, love, power and survival.
Laurel and Caleb begin to develop a love for one another even though they live in separate kingdoms. But their delicate love must endure the harrowing things that roll out while the intricate neighboring kingdoms fight for dominance, survival and peace.
Our main character, Laurel, is a delicate victor and a force to be reckoned with, herself.Her exquisite, intricate demeanor is embodied with strength and resilience. She is a fascinating character within this extraordinary tale.
I, unreservedly, love the kingdoms, and realm, that M.T. Magee cleverly created. It is full of magical treasures and creativity. Although it is a rather long story, my eyes were glued to the pages and I couldn’t put it down. It captivated me from the very first page. It has to be one of the best romantic fantasy books I have ever read.
The Treasure of Gwenlais is filled creatures and characters that are beyond the reader’s imagination. How our author M.T. Magee came up with such an original, mystical and Gaelic tale, is beyond me. I am a bookworm and have read hundreds of fantasy/Sci Fi/Romance books, but this is my absolute favorite thus far.
M.T. Magee, with great care and forethought, knits together an imaginative narrative with many mentions of enchanting Gaelic culture and kingdoms. The plot and characters are intricately woven together to create a fantastical novel.
The world that Magee has created is magical, mystical and spellbinding. It’s an emotional read, as well. I found myself experiencing many welcomed feelings. My reaction to certain events and characters were surprising and thrilling.The descriptions of the characters, and scenery are brilliant, vivid, colorful and enticing.
The Treasure of Gwenlais is a beautiful read and a treasure unto its own.
I found it to be a fabulous escape from reality-and isn’t that what a great book is supposed to do-be a great escape? Well is the book that will take you to another fascinating and irresistible world.
The attention to detail in this marvelous tale is highly impressive and noteworthy.M.T. Magee will take you on an exciting adventure as you read her extremely well written and composed novel-The Treasure of Gwenlais: The Rienfield Chronicles Book One
Highly Recommended!
Click to Purchase The Treasure of Gwenlais: The Rienfield Chronicles Book One by M.T. Magee
Connect with Author M.T. Magee
On Her WebsiteOn TwitterOn FacebookOn PinterestOn YouTube