Must Read "Hell Hath No Fury" By Annabelle Anders

Synopsis:
To keep the money, he has to keep her as well… 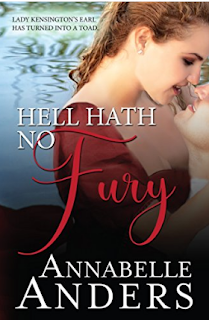 Cecily Nottingham has made a huge mistake.
The marriage bed was still warm when the earl she thought she loved crawled out of it and announced that he loved someone else.
Loves. Someone else.
All he saw in Cecily was her dowry.
But he’s in for the shock of his life, because in order to keep the money, he has to keep her.

With nothing to lose, Cecily sets out to seduce her husband’s cousin, Stephen Nottingham, in an attempt to goad the earl into divorcing her. Little does she realize that Stephen would turn out to be everything her husband was not: Honorable, loyal, trustworthy…Handsome as sin.

Stephen only returned to England for one reason. Save his cousin’s estate from financial ruin. Instead, he finds himself face to face with his cousins beautiful and scorned wife, he isn’t sure what to do first, strangle his cousin, or kiss his wife. His honor is about to be questioned, right along with his self-control.

Amid snakes, duels and a good catfight, Cecily realizes the game she’s playing has high stakes indeed. There are only a few ways for a marriage to end in Regency England and none of them come without a high price. Is she willing to pay it? Is Stephen? A ‘Happily Ever After’ hangs in the balance, because, yes, love can conquer all, but sometimes it needs a little bit of help.

Review:
A beautiful regency romance story.
“Hell Hath No Fury” By Annabelle Anders is a great unpredictable historical romance fictional tale.
Cecily, the main character, married a rotten cheating Earl. She thought he was the love of her life only to find out on her wedding night that he only married her for her dowry and that he was in love with someone else. Cecily, devastated devises a plan to seduce her husband's cousin in an attempt for revenge. But as time progresses she finds that Stephen, her husband’s cousin, is the opposite of her awful husband, the count. Stephen is honorable and handsome. What follows is a roller coaster of emotions, fights and love.

I thoroughly enjoyed this well written story of love, betrayal and happily ever after. Readers are immediately placed amidst the scene of this period piece. The descriptions of the surroundings are vivid and enticing. The author, Annabelle Anders, has a way with words and describes the setting and characters in such a way that it moves the reader’s imaginary senses.
She writes with much detail and forethought.

I was captivated by the plot right from the beginning. It is filled with danger, love, and intrigue.
I couldn’t put it down and turned the pages quickly to find out what would happen next. This is a fresh and unique work of regency fiction. I think all readers will appreciate and revel in this book.
I am looking forward to reading more books by author Annabelle Anders. She has real creative talent and great writing skills.