Must Read "Him Downstairs" By Sherill Turner 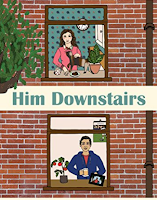 Synopsis:
How do you get over someone who lives under you?
Life for Lucy Jenkins is going OK … ish. Yes, she’s thirty-three, single, and has had to work as a waitress and children’s party entertainer since her social worker salary suffered from budget cuts, but she stays positive and manages to pay the mortgage on her flat. Her home is her sanctuary – until Tom moves in downstairs. Lucy and Tom quickly fall in love and into a serious relationship, which is complicated by Tom’s recent separation from his wife, who he has two young sons with.

Lucy is heartbroken when Tom breaks up with her, saying that something has to give in his busy life. Encouraged/coerced/badgered by her friends into getting ‘back on that horse’, Lucy finds herself at a tacky Singles Night; dating Danny, a Justin Timberlake impersonator; and attempting a rendezvous with her ‘special friend’. Lucy’s quest to move on from Tom would be a whole lot easier if she didn’t have to hear everything he does.
After all, how on earth do you get over someone when you can hear them peeing?

Him Downstairs is relatable Chick Lit for readers 18+ who have dipped their toe into the world of modern dating and relationships. It contains adult language and humour, and is written in ‘British English’.

Review:
Hilarious, Thoughtful Debut Novel
Author Sherill Turner has written an exceptional chick lit read. It is filled with wit and charm.
You will fall in love with the main character Lucy as she is a strong woman with a positive attitude, and slightly neurotic. However she goes through heartbreak during her breakup with Tom who lives downstairs. She loves her home and having Tom living downstairs isn’t easy for her. Her friends try to get her back into the dating game. But it is impossible for Lucy to get over Tom with him living right under her downstairs.

I loved “Him Downstairs” by Sherill Turner. It is a light hearted read, but filled with drama as well. It kept me laughing and turning the pages quickly. The characters are quirky and well written. I felt a strong connection to the characters and missed them when I finished the book. The plot and characters are woven brilliantly together. At times, I felt like it was a true story.

The writing is exceptional, especially for a debut author. It’s deeper than your classical chick lit writing, it’s a great romantic comedy. It’s different in a very pleasing way. It can be categorized in “fiction for women” as well as “chick lit”. There were many emotions involved and I do have have to add that along with the laughter there are also a few tears.
The writing of the descriptions of the settings and scenes are superb. I felt like I was in the setting myself. That is an important value in writing. Our author did an excellent job.
I found myself fully engaged wondering what would happen next. I read it in one day, that’s how good it is. This would be a great beach summer read, or anytime you want to read a funny romantic witty book..


Him Downstairs is an overall wonderful book. Chick Lit Cafe highly recommends it to all fiction readers. Click To Purchase “Him Downstairs” Now