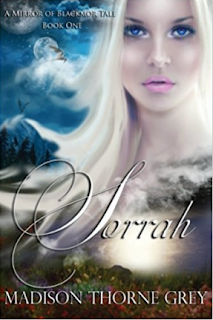 Synopsis Sorrah steps through an enchanted mirror built by her druid ancestors and emerges in the center of a village occupied by rebel forces. Thought to be a spy, she is watched closely and brought before Rohen, the incredibly foreboding, yet, ruggedly handsome leader of the resistance.
Sorrah has spent most of her twenty six years keeping her nose in fiction and herself far away from the crazy aunt who raised her. Everything changes the day she learns that her mother magically traveled through a mirror constructed by druid ancestors, lived in a world called Sorrah, fell in love with a Sorrien man, her father, and conceived a son.
Destined to walk in her mother’s footsteps and determined to rescue her imprisoned brother, Sorrah locates the enchanted mirror, steps through, and emerges in the center of a pond at a village occupied by rebel forces.
Danger surrounds her, yet, she senses a strange oneness with the resistance's leader, Rohen, and the world of Aaru.
She needs to trust her heart where Rohen is concerned, and be stronger than she ever thought possible in order to take her rightful place among the people, and fulfill her destiny as the chosen of the gods.

Review
Magical, captivating, engaging.
Raised by her mother’s close friend, the beautiful Sorrah is no ordinary young woman, she is destined for more than the life most people live. She is unknowingly headed for adventure and a new life within a magical realm called Sorrah, the name her mother named her after. After reading her deceased mother’s journals, she begins to become intrigued and believe that this enchanting land may actually exist.
In her writings her mother instructs Sorrah that she must find the magical mirror, slip into the land of Sorrah and rescue her brother who is imprisoned in the other worldly realm. In the land of Sorrah, she not only finds magic and adventure, but as fate would have it, she finds love as well.

I thoroughly enjoyed Sorrah. It took me to another world for the couple of days it took me to read it. It is a fantastic fantasy with adventure, magic, war, love and celebration.
It’s smart but easy to read. The story is written well and the plot is exciting, captivating and very meaningful. There are some twists and turns that surprised me and kept me turning the pages. This is the kind of book that throws you right into the story, holds your attention and captivates your imagination.
The characters are all well rounded and developed. The interaction and communication between them is realistic, outstanding and very well written. The descriptions of the beautiful land, Sorrah, are very vivid and beautiful.


This book really intrigued me. It’s not just another fantasy book. It is very meaningful and written with a high standard of literacy. If you love fantasy, romance, adventure and excellent writing, then Sorrah is the book to read.
Chick Lit Cafe
Click To Purchase "Sorrah (Mirror of Blackmor Book 1) By Madison Thorne Grey "