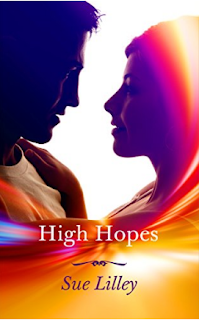 Synopsis:
Grace, Sam and Dixie have known each other forever. But Grace has a secret. Pregnant and penniless after one drunken night with Sam, she gave up her baby for adoption without telling him. And condemned herself to twenty years of guilt. When her daughter traces her, out of the blue, Grace longs to meet her. But she’s asking about her father and if Grace confesses to Sam after all these years, it will surely wreck his marriage to Dixie. How can their friendship survive such a betrayal? Yet does Grace have a choice?Excellent! I thoroughly enjoyed "High Hopes." It’s honest, touching and funny.
It’s a fiction story with a realistic, amusing and slightly dramatic plot.

Review:
Author Sue Lilley draws readers in right from the start by arousing curiosity and interest. With an exciting developing plot of close friendship, sexual desire and secrets, one can’t help but to be immensely captivated.
The storyline, is intricate, enjoyable and complicated in a good way; it flowed nicely. It is a page turning, light hearted pleasurable read. I read it in one day, as I couldn’t put it down.
Readers will be filled with anticipation as to how this story will turn out. There are twists and turns which peaks the reader’s inquisitiveness and concern. It all works well, and in the end, the story finds a satisfying close.

There are many books written as romantic dramas, but this one felt unique and new.
The somewhat eccentric, quirky main characters are composed of elaborately interconnected parts which the author writes well.
High Hopes fits well within the chick lit genre, as it is a fun book filled with things that women do and can relate to. The inner struggles of the characters resemble life for women and men a like.
Set in a small town in England, I reveled in the local culture and beauty described throughout the book. The author, Sue Lilley, put me right in the setting with her lavish descriptions and flamboyant literary accounts.

Very well written, this book read like a novel to me. It’s fictitious prose and narrative is of considerable length and complexity, and portrays involved characters and it presents a sequential organization of action and scenes. It’s by no means shallow as are some chick lit reads.
Author Sue Lilley has written a great work of fiction and a great above average chick lit read.
We recommend High Hopes to all our chick lit readers that love a sassy, witty, sexy and smart read. Chick Lit Cafe would be interested in reading more books by Susan Lilley.
Pick Up Your Copy of “High Hopes” By Sue Lilley
Click To Purchase High Hopes

The Last Valentine By Felix Alexander 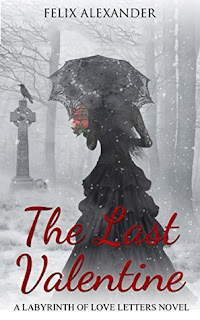 The Last Valentine
By Felix Alexander


Synopsis:
When Olivia Villalobos finds a bloodstained love letter she endeavors to deliver it before Chief Inspector Sedeño finds it in her possession.
A city along the southern coast of Puerto Rico emerges in the aftermath of the Spanish-American War. Olivia, daughter of a drunkard police investigator who never knew the truth behind her mother’s disappearance, finds a bloodstained love letter in the hidden compartment of her father’s coat. Convinced it belonged to the man recently found dead she sets out to deliver it to the Labyrinth of Love Letters. A mysterious place believed to be an urban legend where the transients of forbidden love leave missives for one another. She enlists the help of Isaac Quintero to find the Labyrinth and they soon realize their quest has opened the door into Old Sienna’s darkest secrets—the perils, madness and depth of tragic love.


Review:
Absolutely beautiful! If you love the novels of some of the great romance and intrigue writers of all time, then you will love The Last Valentine. It is similar to those of Gabriel Garcia Marquez and Isabella Allende. It is a combination of genres including romance, historical, and mystery. It is a great read for women, and not your more shallow chick lit read. This one stands alone unique, entrancing, full and rich.  It is a cocktail of mystery and intrigue filled with longing and hope.


The Last Valentine is all about romance and beauty. It captures the essence of love in all it’s forms. There are many endearing love stories gently woven within the story.
It is written in a passionate poetic voice that keeps readers engaged and delighted. The author Felix Alexander expresses his emotions in a very imaginative and beautiful way. The many characters are brilliantly written within the story, Many having interesting eccentric personalities and which all have an important place in the end.


Along with the beauty that pleases the aesthetic senses, there is a wealth of local historical knowledge expertly penned within the storyline, making it especially interesting. The book is set in the enchanting land of Puerto Rico. The author depicts the region as a captivating beautiful land with scenes of beauty, interest and culture.


Felix Alexander’s descriptions of the sights and places are so well written, defined and poetic that readers feel they are there seeing and experiencing what the characters in the book felt and saw. He puts readers directly in the setting with his exuberant sensual descriptions throughout.
The author causes the reader to long to go back in time and visit the places, people and culture in The Last Valentine.
The Last Valentine by Felix Alexander is a must read for all romance, historical and mystery lovers. It is a fulfilling short read. It a sensory poetic feast and a great escape from our more ordinary lives.


Chick Lit Cafe recommends The Last Valentine By Felix Alexander to all our Chick Lit
Lovers.
Click To Purchase

Des Fairweather is a struggling young musician who fears he possesses to same destructive magical power that killed his parents. While helping his tabloid reporter friend, Jake Banner, investigate reports of talking flowers, Des meets Kalida, a beautiful and mysterious young woman who says she is being pursued by her people, evil beings from a world called the Caverns. Can Des put aside his fear of magic and find a way to rescue Kalida?
Butterfly Waltz is an enchanting fantasy filled with magic, romance and otherworldly adventure. Readers will revel in this intriguing tale that is woven with the kind of beauty that transcends this world and tantalizes the human imaginary senses.
Author, Jane Tesh, guides us through a clever story of two friends that set out to search for a story for a news column. What they end up finding is intense adventure, intrigue, love and the magic they both desire, and all though they didn’t know it, needed all along. Butterfly Waltz is a tapestry filled with supernatural encounters, good and evil, and an ending that satisfies the soul.
There are many fantasy books out there, but this is a delightfully different spin on the genre. I loved it and I think young adults, as well as more mature adults, will love it too. I've never read a book that depicts music as colorful and magical as this one.
Butterfly Waltz is one beautiful great read.
It is well composed and written with a clear voice of hope, lightheartedness and positivity. The storyline flows with ease, simplicity and drama, and not to diminish the experience of a great writer.
Pick up Butterfly Waltz. It’s a rather short read and you will leave with a smile and the inspiration to find your own magic in the music.